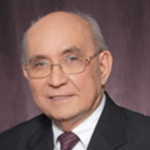 Father Bernas is the Firm's Of Counsel. He is currently Dean Emeritus of the Ateneo De Manila University School of Law. He is a professorial lecturer in Constitutional Law and Public International Law in the said university.

He obtained his Bachelor of Laws Degree from the Ateneo De Manila University School of Law in 1962 and his Master of Laws and Doctor of Juridical Science from New York University in 1965.

A noted scholar and authority on Constitutional Law, Father Bernas was one of the drafters of the 1987 Constitution. His extensive writings on the subject, containing the deliberations and debates on the various provisions, are frequently cited in law books and Supreme Court decisions.

Father Bernas has published various legal articles, papers, and lectures and has authored the following publications:

Father Bernas is also a noted columnist of the Philippine Daily Inquirer.